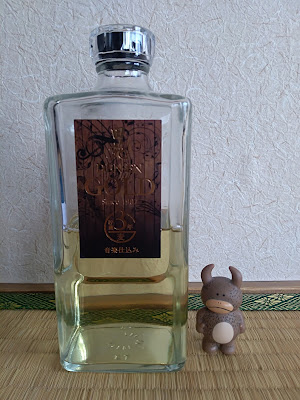 Let's put things straight from the start: at 1200 yen this is a steal. DenEnShozu is one of the big
bosses in shochu production in Japan, but their focus on cask aging puts them in a league of
their own. They were the first to commercialize a cask-aged shochu in 1982, and that came after
26 years of trial-and-error experimentation. They manage to beautifully age sweet potato shochu
too, but this review is all about how DenEnGold is aged barley shochu, and a very beautifully
made one.
Besides barley and koji, classical music is the other main ingredient contributing to this spirit:
speakers transmit the vibrations of music through the tanks where the shochu, now diluted down
25 abv, rests before bottling. The company maintains this causes water molecules to wrap
themselves around alcohol molecules, providing a smoother mouthfeel.
I am unable to dispute over the chemical legitimacy of this claim, anyway speakers beam music
through the fermenting mash as well, so it looks like the guys at DenEnShuzo are firmly convinced
this has a major influence on the final result.
The casks which are used for aging are mainly oak, and they are hosted in three eight-floor
storehouses. DenEnGold spends three years maturing in wood and what comes out of it is
a very intense, satisfying smell of toasted barley which, once sipped, is almost a little prickly on
the tongue. There are baked products lingering here in the background, alternating between bitter
and sweet, while the vanilla from the oak only comes out as an aftertaste. Every once in a while
apricots and wood show up and join the party. 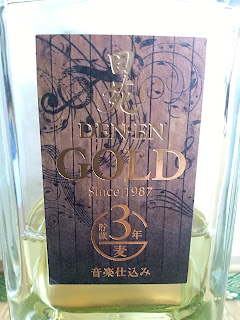 ザ ブレイクダウン
Maybe this won't be a life-changing experience for the jaded spirits geeks, but at retail price
DenEnGold is an undisputable bargain and deserves to be a staple of every self-respecting
Japanese booze-imbibing household.
Vote: 3,5  + 2 + 1 = 6,5
at December 14, 2021 No comments: 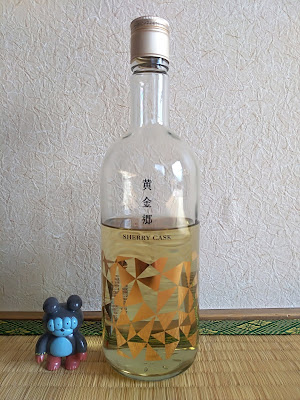 Good old Latin letters on the bottle salute you with the pretty straightforward catchphrase "Sherry cask", which compensates for the enigmatic "黄金郷" printed above it.  It took me a little search to find out the three kanjis are pronounced "Ougonkyou", it is in fact the Japanese world for El Dorado. This shochu is not one of the ubiquitous, most popular brands and finding a bottle demanded a little effort, but that is not enough to establish a connection between it and the legendary bountiful land hidden somewhere in South America. What the name refers to is an area of the Kuma region, in Kumamoto prefecture,  whose golden ears of rice earned it the name "Eldorado" (the golden one, for the Spanish impaired).

The shochu itself has a golden hue thanks to the aging in sherry casks, though spirits geeks will be disappointed by the lack of information about the actual time the spirit rested in them. (To deepen the geeks' dismay, I shall add that the company's website states the casks come from 'abroad', which is a geographically vague definition, to say the very least...) .

Thank God I am not a geek, just your regular booze fiend: so pop goes the bottle and the smell coming up from the glass mixes the not cloying, gentle sweetness of rice with something reminding me of pastries made with liquor-soaked peaches (childhood memories kicking in, I guess). The influence of the sherry casks seems to have brought some slightly sour notes, not the all-round red fruits sweet attack you find in sherry bomb whisky, and they work great with the rice. The mouthfeel is very soft, and the flavour will linger long around with some faint soapy aftertaste, there is also a little dryness on the tongue, which kind of gave me a hankering for a cigarette.
Ah, alcohol, you are indeed the gateway to all vices. And I salute you for that! 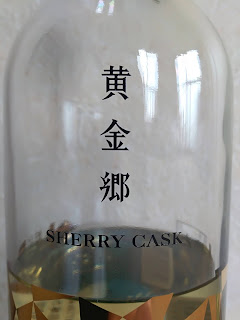 ザ ブレイクダウン
This was a very pleasant surprise, I like this one quite a bit and I wouldn't mind having always a bottle around the house.  It is encounters like this that push you to investigate the world of shochu furthermore.
Vote: 3,5  + 2 + 1 = 6,5
at November 15, 2021 No comments: 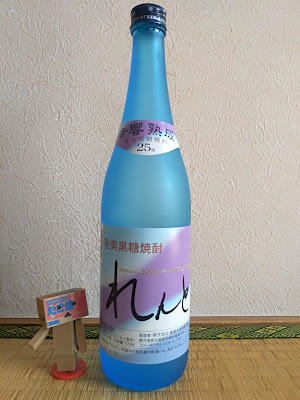 Just as the need for malternatives brought me to shochu in general, it was when
looking for an alternative to rum that I first tried brown sugar shochu. Recently I had a hankering for my beloved Appleton Estate rum but a 20 minutes subway ride to score a bottle wouldn't fit into my schedule: following the line of thought "sugar-cane based booze will do" I thus grabbed a bottle of the ubiquitous Lento at the supermarket.
The word  lento comes from classical music's terminology, which the Japanese seem to be very familiar with judging from the bicycles named allegro, fortissimo or arpeggio (to quote just a few) I seeall over Tokyo.
The name of this shochu seems to refer to the sound of classical music played through the  steel tanks the spirit spends three months in, an aging process the distillery calls "acoustic maturation" (my approximate translation of 音響熟成). Whether the likes of Mozart and Vivaldi exert any influence on the shochu itself is anyone's guess, though.
I'll try to enhance further aging in bottle by exposing the unaware distillate to hyperfast technical death metal, rest assured I'll keep you updated about the results.
By Japanese law, brown sugar shochu can be produced exclusively on the Amami islands, which are roughly situated between Okinawa and Kyushu in the most southern part of the Japanese archipelago.
The production process involves the use of rice koji, aka the mold which makes
things tasty (think soy sauce and miso), and low-pressure distillation. Air pressure inside the stills is lowered to the point where alcohol evaporation happens at about 44 degrees celsius, as opposed to the 78 degrees necessary in normal conditions. This technique is pretty common in shochu production, and it is deemed to give the spirit a cleaner, neater taste without undesired impurities.
Time to dive inside the bottle at last: Lento is transparent as water and leaves long, thin legs on the  glass, given its relatively modest abv. The smell is sweet in a subdued way, it reminds me of slightly unripe red grapes: European grapes that is, Japanese grapes smell like they have a cloud of candy cotton hanging around them. There is also some sort of faint vegetal, herbaceous smell which pairs well with the sweetness, think rum agricole with the volume turned down dramatically.
The mouthfeel is super delicate, the flavours are very close to what the nose suggested, with a slightly bitter note added in the ending. It leaves a pleasant afterglow in the mouth, don't expect to have your tongue buried in molasses: gentle is the name of the game here.
I like this quite a bit, it will not have you screaming from the roof in rapture, but it's gonna be a reliable buddy to hang out with. Very likely to work great in cocktails. 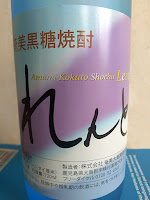 this is a bottle you can find in almost any supermarket and its cheap price makes the cost/performance ratio highly satisfactory. Not super complex or sophisticated but definitely very, very pleasant.
Vote: 3 + 2 + 1 = 6
at November 06, 2021 No comments: 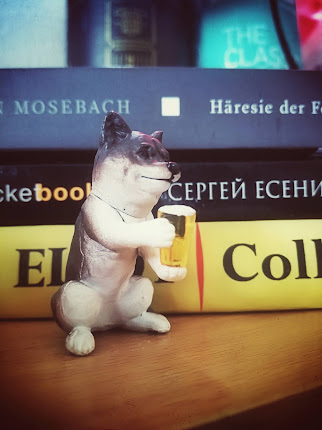 This blog chronicles my explorations of the fascinating and somewhat elusive world of Japanese shochu. I am a European man in his forties, living in Japan since 2016: the transition from binge-drinking to a less troglodytic enjoyment of booze has brought me to focus more on the organoleptic properties of spirits rather than on their ability to induce stupor.In layman's terms: getting hammered beyond recognition is no longer the priority, flavour is.
My forays in spirits appreciation began with whisky, price hikes and fluctuating quality pushed me into looking a little bit further down the aisles of the liquor shop. Awaiting there were rows and rows of enigmatic shochu bottles: curiosity and thirst met, it was love at first sight.
I am your average drinking prole, though, alas! no sommelier tastebuds grace this tongue of mine and what you'll find here are more or less the log entries of the bottles I buy and drink.
Since information on shochu in the English-speaking world is scant (the great book
'The shochu handbook' by Christopher Pellegrini is an exception) I thought maybe putting my meager two eurocents here wouldn't be completely useless.
Let's stress  it once again: these are the opinions of your average drinking guy, don't take this as spirits-dogma spewed out by the pope of booze.
Ratings are the very definition of subjectiveness but at least they give a rough outline of what to expect, so I tried to come up with my own rating system.
The scale goes from 0 to 10 with the breakdown of: zero to six points for nose and flavour (0 = out of the sewers of hell, 6 = liquid beatitude), zero to two for price/quality ratio (0 = this is a scam!, 2 = this is a steal!), zero to two for likeliness to buy it again (0 = not even at gunpoint, 2 = I'm on my way to the liquor store).
As I'm writing I do not even know if anyone will ever read these lines, it feels like sending out a message in a bottle. Even though in this case, may Marshall McLuhan forgive me,  the bottle is the message.